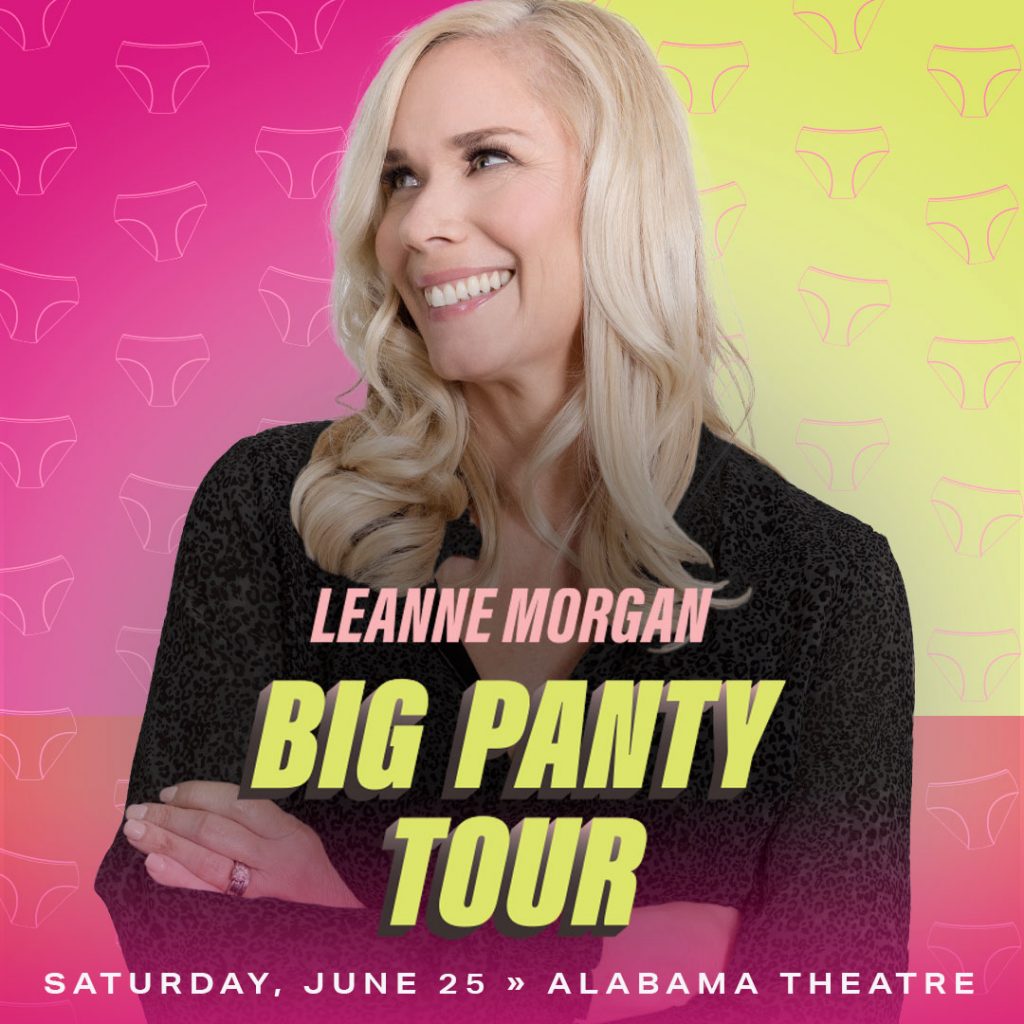 Outback Presents is pleased to announce comedian Leanne Morgan‘s first national headlining tour will continue across the United States in 2022.  Today, the rising star revealed The Big Panty Tour will bring her hit stand-up comedy routine to the masses in 37 new cities.

“I’ll be coming to a city near you and it’s going to be so much fun! Come as you are with the people you love. I’ll have on big panties, and I suggest you do too! If you want to laugh and have a good time, get your tickets and I’ll see you there. We’ll have a ball. Oh, and people in little panties are welcome, too. XOXO,” says Morgan.

Morgan’s style of comedy combines her southern charm and hilarious story telling about her own life into an act that keeps fans coming back for more. As a married stay-at-home mother of three, people often accuse Morgan of spying on them because she seems to be living their same life. The fact that so many can relate to her comedy has made Morgan a hit even among the strangest of audiences.

“Leanne is a one-of-a-kind comedian,” notes Morgan’s manager Matt Van De Water. “Outback is the best comedy promoter in the business. I have no doubt the pairing will result in sold out shows everywhere. I can’t wait!”

“We are very excited to collaborate with Leanne on launching the next stage of her career,” adds Outback Presents show coordinator Taylor Freeman. “Her ability to tell a story and connect with her audience comes so naturally, and she is a total pro. This is going to be a great year for her and we’re thrilled to be a part of it.”

Morgan is exclusively represented by Valentijn Sloot at the Gersh Agency and Matt Van De Water at Caravan Management.

While performing in San Antonio, Morgan was asked to appear at the Las Vegas Comedy Festival and shortly thereafter appeared on ABC’s The View in a comical housewife segment. She appeared as a finalist on Nick at Nite’s Funniest Mom and toured three years with the Southern Fried Chicks. She has appeared in comedy clubs, performing arts centers, and theaters all over the nation. She held a contract with Warner Brothers and ABC to develop a sitcom based on her comedy and also collaborated with legendary writer/producer Matt Williams (“Roseanne,” “Home Improvement”) on a half-hour comedy project. Her celebrity fans include Dr. Phil and Paula Deen. She has appeared on both of their shows.  Her comedy is in daily rotation at Sirius.

Leanne knew at the age of 5 that she wanted to be a comedian but being born and raised right outside of Nashville, in Middle Tennessee, in a farming community of 500 people, she didn’t know how in the world it was going to happen. She grew up loving comedy and her very funny and encouraging mother, Lucille, allowed her to skip kindergarten to stay home and watch Hollywood Squares and Match Game.  At age 10, after “killing” in the 4-H talent show, she was bitten by the performance bug.

After graduating from high school, Leanne was feeling the lure of Hollywood, but the idea of moving was unheard of and too daunting for a country girl who had never been away from home, so she enrolled in college at The University of Tennessee, where she graduated (by the skin of her teeth) with a degree in Child and Family Studies. Her greatest desire in life was to be a mother. She married her husband Chuck and they moved to Bean Station, TN in the beautiful foothills of the Appalachian Mountains.  Chuck owned a mobile home refurbishing business and Leanne worked with him…for a very short time. Chuck liked to boss and Leanne wasn’t one to be bossed, so she decided to get pregnant instead!

After having her first baby, she was in absolute heaven, but she still had a tug in her heart to do stand-up. To make a little spending money, Leanne started selling jewelry at home parties. She was supposed to talk about the jewelry but instead talked about breastfeeding, hemorrhoids and being a mama. Women thought she was funny, somebody peed on a couch and before she knew it she was booked out a year in advance. The company saw what was happening and asked her to speak at their sales rallies. It was there that women started saying, “you need to do stand up!” That gave Leanne the courage to really go for it!

Her husband sold his business and went to work for a large company that took them to San Antonio. Leanne finally had access to comedy clubs and things quickly started to happen. She appeared on The View’s “Hilarious Housewives” segment, Nick at Nite’s Funniest Mom and has toured with the Southern Fried Chicks. Leanne continued to work theaters, clubs and corporate events while raising three children with her husband back in Tennessee, which she still calls home.

Leanne’s storied career has landed her on stage at the Montreal Comedy Festival and has brought her development deals for her own sitcom with ABC and Warner Brothers, writer/producer Matt Williams (“Rosanne” and “Home Improvement”),TV Land and currently with Sony Television. I guess you could say she’s the Mrs. Maisel of Appalachia!

Clips from Leanne’s Dry Bar Comedy Special “So Yummy” garnered over 50 million views and opened her up to a whole new audience. Her fan base continued to grow when she shared heartfelt messages and Jell-O salad recipes from her back porch during the pandemic, and assured people that “everything’s gonna be alright.” Her relatability makes everyone feel as if she’s talking directly to them!

Now after 22 years in comedy, Leanne is embarking on her 100-city Big Panty Tour across the U.S. with Outback Presents. Leanne is a wife and mother of three from Knoxville, TN.  Now that her children are grown, Leanne is so grateful to have this opportunity at this time in her life. And to top it all off, she’s got a new grandbaby….SO YUMMY!

Outback Presents is the leading independent, full-service promoter of live entertainment. From their home base in Nashville, TN, Outback Presents specializes in producing music and comedy shows, tours and festivals across North America and connecting their diverse roster of artists with their fans. For more information, visit www.outbackpresents.com.